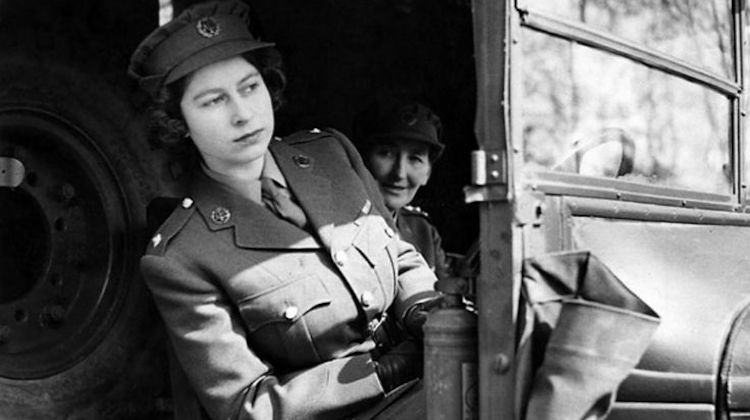 Our guest this month, Clare Harvey, on the remarkable women who inspired her novels.

It began, as many of the best things do, with a flippant comment.

My husband was polishing his medals ready for the 2011 Remembrance Sunday parade when I remarked that I bet he had more gongs than his dad, these days (my husband was a third generation career soldier – both his father and grandfather had served in the same Corps). “Oh, Dad doesn’t have that many medals,” he replied. “The joke in our family growing up was that Mum had seen more enemy action than he had.”

“Yes, she was on the anti-aircraft guns in World War Two.”

And that was how it started.

How had I not known that my own mother-in-law saw active wartime service? I was intrigued, and inspired. Although she was sadly no longer alive to gather reminiscences from, the revelation that my husband’s mum had been a teenage soldier in the Second World War was the seed from which my debut novel, The Gunner Girl, was grown.

I read everything I could about the Auxiliary Territorial Service (ATS), as it was then called, watched old newsreels, and visited re-enactment days, in pursuit of finding out more about what life would have been like for her and the young women she would have worked alongside.  Gradually I was able to spin fiction around the facts I discovered.

During the course of researching The Gunner Girl I came across Mary Churchill (latterly Baroness Soames), the Prime Minister’s daughter who was also a girl soldier on the anti-aircraft guns. Her autobiography, A Daughter’s Tale (Black Swan, 2012) was fascinating reading, especially as Mary’s experiences spanned the gamut of wartime life: as an enlisted member of the ATS, she was a regular soldier, working hard to rise up through the ranks to become Junior Commander, but later in the war her father took her on oversees trips as his aide-de-camp, and she was present at high level discussions between Churchill, Stalin and Roosevelt. Having read her memoirs I had to include her as a cameo character in The Gunner Girl. And I discovered another elderly lady whose wartime role had been almost forgotten: Princess Elizabeth – now HRH the Queen – was also a teenage girl soldier in WW2. As a 16-year-old in 1942 she registered for war work, and took up a position with the ATS when she turned 18, as a trainee vehicle mechanic. When I found that out, I had to give her a walk-on part too. To incorporate both Mary Churchill and Princess Elizabeth into the narrative I set The Gunner Girl on an anti-aircraft gun emplacement in Hyde Park halfway through the war.

With what had been – for me – a revelation that there were women soldiers in WW2, I began to wonder what other roles women have undertaken over the years that have been overlooked or forgotten.

When I began to plan the follow-up to The Gunner Girl, my husband was still in the military. In fact, his final posting was in a supporting role to the Special Forces (SF)  – he wasn’t SF himself, but worked as their engineering advisor for a couple of years – I began to wonder if the SF existed in WW2, and if so, whether women were involved at all? The answer was ‘yes’ on both counts. And that was the stepping off point for my second novel, The English Agent.

One of the forerunners to today’s Special Forces was an organisation called the Secret Operations Executive (SOE), a sabotage organisation created by Winston Churchill himself with the stated aim to ‘set Europe ablaze’. The SOE agents weren’t spies; they were saboteurs, trained in covert operations and hand-to-hand combat. Their role was to foment and support resistance in Nazi occupied Europe. Women were involved at all levels of the SOE, and there are some truly incredible stories of their exploits that are still coming to light today. Finding out their stories was the inspiration behind The English Agent.

During the course of WW2 the SOE had more than 50 operatives working in Nazi occupied countries (numbers vary – some agents were recruited in-country so actual numbers may have been higher). Of these, thirteen are known to have been killed in action or in Nazi concentration camps. The War Office was, by necessity, ahead of its time in recruiting women for these undercover roles. The reason for this is that in Nazi occupied countries, such as France, men of working age were corralled and used as slave labour in ‘work camps’ in Germany, so any fit, young man seen out and about without a uniform would have drawn attention to himself. Young women, on the other hand, would have aroused little suspicion. For that reason bi-lingual women were recruited and trained as couriers and wireless transmitters, and parachuted (or, later in the War, dropped by Lysander plane) into enemy territory, with false documents and a plausible alias. Although recruited as couriers and transmitters, female SOE operatives had all received weapons, field craft and hand-to-hand combat training, and frequently had to use these skills. For example, Pearl Witherington (codenamed ‘Pauline’) was parachuted into France and posed for eight months as a cosmetics saleswoman, whilst actually working as a courier for the head of an SOE network. When the Gestapo arrested her male SOE boss and sent him to a concentration camp, Pearl took over running some 1500 resistance workers, and the force she commanded was reputedly responsible for the deaths of over 1000 Nazi soldiers. The bravery and stoicism of SOE agents like Pearl Witherington was humbling, and I used an amalgam of several of them in the creation of my fictitious heroine ‘Yvette’.

Another incredible discovery was the life of Vera Atkins, the London-based agent handler for SOE’s French section. Romanian-born half-German Vera should by rights have spent the War interned as an enemy alien, but by dint of her intelligence, connections (she was rumoured to have been involved in espionage in pre-war Romania, and to have had an affair with the German ambassador there), facility with languages (she spoke four fluently), and sheer force of personality, she managed to bag one of the top jobs in the SOE. After reading Sara Helm’s excellent biography, A Life in Secrets: Vera Atkins and the Lost Agents of SOE (Abacus, 2006), I knew I had to include her in the book, too. The English Agent ultimately became a kind of twist between a fictionalised version of Vera and one of her agents (a composite of the real-life agents I’d researched), set in London and Paris at the height of WW2.

My third book, The Night Raid, came about again due to the discovery of a strong woman with wartime links. Dame Laura Knight was a war artist in both the First and Second World Wars. Though perhaps less well known today, in the 1940s she was at the height of her fame. She’d won critical acclaim for her paintings of circus performers, gypsies and ballet dancers in the inter-war years, becoming a Dame of the British Empire in 1929 and a member of the Royal Academy in 1936 (only the second woman to do so). The War Artists Advisory Committee (WAAC) commissioned her to paint women on the home front during WW2, the most famous of which is of a girl working in an armaments factory. Titled Ruby Loftus screwing a breech ring, the 1943 painting shows a young industrial recruit in the process of tooling an anti-aircraft gun, and is now part of the Imperial War Museum’s collection.

As with the previous two books, it was both fascinating and inspirational to find out more about the life of a talented and charismatic woman. Laura wrote two autobiographies: Oil Paint & Grease Paint (Penguin, 1941*), and The Magic of a Line (Kimber, 1965). They were wonderful to read, and obviously not ghostwritten, because her voice comes through so clearly in the text. There were also two biographies of the artist: Janet Dunbar’s Laura Knight (Harper Collins, 1975), and Laura Knight: A Life by Barbara C Morden (McNidder & Grace, 2013).

Reading all of these accounts of Laura’s life really made me feel I’d taken the time to get to know her, but as she herself admitted, she still kept secrets from her public and herself: “To my shame, I must admit many are the corners of my life into which I dare not peep.” (Dame Laura Knight, from The Magic of a Line)

For The Night Raid I’ve taken what I discovered about the real Laura Knight and played with the knowledge that she confesses to withholding some information about her personal history. I have imagined a slice of her life that didn’t actually happen: that she returned to her home town of Nottingham to paint the girls at the armaments factory, and in the process discovers secrets about her own past and the lives of the young women whose portraits she’s working on…

One of the joys of working as an author of historical fiction is having the opportunity to delve into the lives of inspirational women from our shared past. From royalty to our own mothers, grandmothers, and great-grandmothers, stories of remarkable women are everywhere, waiting to be re-discovered, and it is my absolute privilege to have the opportunity to breathe new life into their narratives through fiction.

The Night Raid (Simon & Schuster) is published in paperback on 14th December 2017. You can catch up with Clare on her website, or find her on Twitter and Facebook.