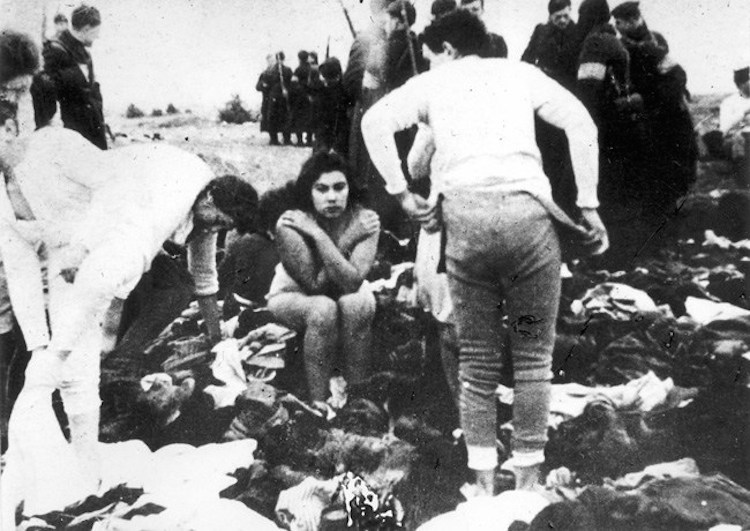 In 2002 my first novel, Call The Swallow, was published. Set before, during and after the Holocaust, it tells the story of a man’s search for his sister who disappeared during World War II.

When I was on the publicity round for the book, the question that kept cropping up again and again was how was it that I, the son of an Irish father and an English mother, with no Jewish connections whatsoever, had come to write a book about the Shoah. The answer – I eventually worked out – was that there had been several elements that had come together. But more than anything else, it was this photograph.

There’s a fairly standard piece of advice to writers which is to ‘write about what you know’. Apart from being a story about the Holocaust, Call The Swallow is also the story of a man whose marriage ends. It breaks up under the most horrifying circumstances, but my marriage was coming apart at the time and I felt the need to write about it in some way. This gave me that way.

I have always been fascinated by the accident of birth. We are born in a certain place in a certain time in certain circumstances. At the time I began writing Call The Swallow, I was in my first marriage and my son had just been born. I had always been interested in WWII and so I began to wonder, what if I was married and had a young child but instead of living in rural Ireland in the 1990s, I was living in urban Poland in the 1940s? And what if, in addition, we were a Jewish rather than a (lapsed) Catholic family?

I wanted this book to be deeply disturbing. I didn’t want it to be an easy read. I wanted it to be hard on the reader – so that they might remember the book and its contents. People told me they cried while reading parts of it. My sister-in-law said she had nightmares after it. I received anonymous hate mail from anti-Semites following its publication. One acquaintance of mine stopped speaking to me (and hasn’t since) on the basis that I must be an appalling person to write of such things. I knew then that I had done a good job. These things happened. We can’t forget.

But more than anything else, the seed from which Call The Swallow grew was this photograph that I came across while researching the book. It is a picture of a girl taken at a Nazi mass execution. She’s the one squatting down with her arms crossed, covering her breasts. The picture really came to haunt me and still does. Who was she? What was her history? How did she come to be in that place at that time?

Call The Swallow ended up being a fictional answer to these questions. But later, much later, I discovered the real answer. Because this girl has a name.

The picture was taken at a mass execution of Jews from Liepaja, Latvia on December 15, 1941. During a three day period from 15-17 December, in the depths of the freezing Baltic winter, 2,749 Jews, mainly women and children, were killed by three German and Latvian firing squads. The victims were force marched from Liepaja to the beach at Skede, a distance of about 8 miles. Here a trench had been dug in the sand dunes. The trench ran parallel to the shore and was about 100 metres long and 3 metres wide. The Jews were made to undress in the freezing wind and snow and were then shot so that they tumbled into the trench. Unbelievably an SS man, Carl-Emil Strott, took photographs of the killings.

The girl’s name is Mia Epstein. She is eighteen. She is squatting down and covering her breasts not just out of modesty but because it is so cold. The people either side of her are her mother and her fifteen year old brother.

Mia has been my silent companion ever since I stumbled upon her name on an obscure internet site. Maybe she’s why I can’t stop writing books set during the Holocaust. Maybe it’s time to bring her back to the world and maybe this is a first small step towards doing that.

The girl’s name is Mia Epstein.

Fergus O’Connell’s new novel, also set during the Holocaust and entitled The Paradise Ghetto, will be published in 2016.