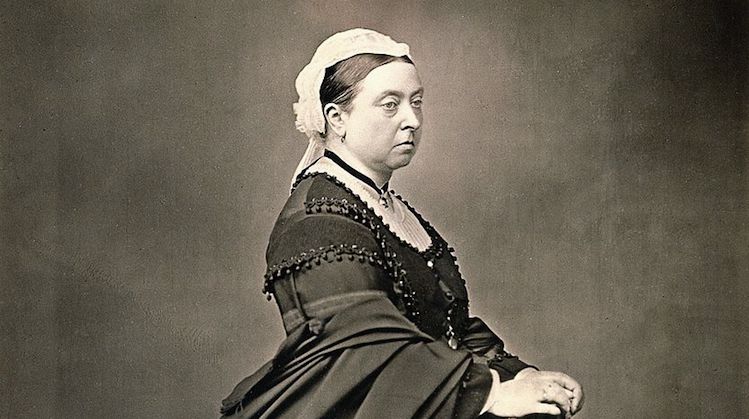 Our guest this month, historian Deborah Cadbury, on the royal dynasty that ruled Europe.

While researching extensively in the royal archives at Windsor Castle for my latest book, Queen Victoria’s Matchmaking, I was struck by the resonance between late-nineteenth-century Europe and today’s world. Reading accounts of the inflammatory rhetoric of the German Kaiser, the incidents of anarchist terror, the anxieties over Europe and the jostling between the Great Powers, it was hard not to feel a disturbing sense of déjà vu. ‘If history repeats itself, and the unexpected always happens’, George Bernard Shaw once observed, ‘how incapable must Man be of learning from experience?’

I set out to write this book in order to explore how seven of Queen Victoria’s grandchildren came to occupy European thrones at a crucial period in history at the time of the First World War. The rise of the royal family at the end of the nineteenth century was spectacular. This was a time when the Russian emperor could call the British queen ‘Granny’ even though he ruled as an autocrat with absolute power over almost one sixth of the earth’s surface and was the proud inheritor of three hundred years of ruthless Romanov rule. The German emperor, Kaiser Wilhelm II, was Queen Victoria’s eldest grandchild, and, in effect, a semi-autocrat at the height of his ‘personal rule’. Queen Victoria herself stood at the helm of the largest empire the world had ever seen, approaching one quarter of the earth’s surface. Looking at the photographs of family gatherings, many of them kings or queens, crown princes and princesses, as they peered unsmiling into the camera in their military uniforms or their fur trimmed gowns, they exuded such an air of confidence. How was it possible for one family to amass such power? 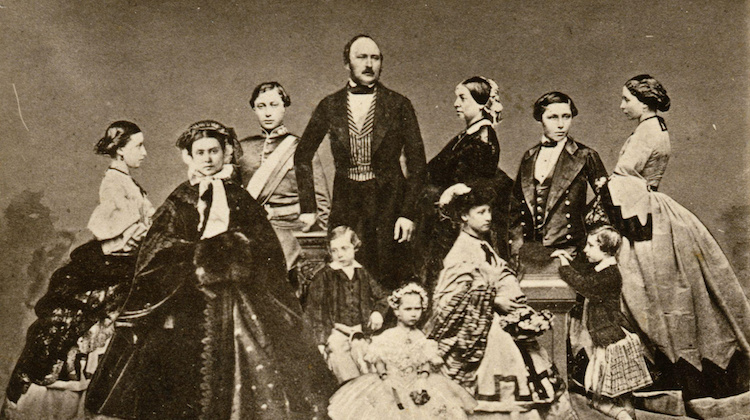 Each day as I walked up the steep flight of stone steps to the top floor of the Round Tower of Windsor Castle, home to the royal archives, it was like stepping back over a century to the glittering Europe of the Belle Epoque. There were wonderful records beautifully preserved in leather bound volumes: letters to Queen Victoria, ‘the very best of Grandmamas’ from her grandchildren growing up in the palaces of Europe; the remarkable correspondence between the queen and her oldest daughter, Vicky, in Germany, in which they expressed their fears for the future; the queen’s own diary faithfully recording who she saw and what was said, permitting me a chance to glimpse how the queen exerted her control. I was particularly interested in her grandchildren’s youthful lives. What were their own hopes and dreams of marriage and did this clash with their royal obligations? How did they deal with their forceful matchmaking grandmother? How did the same beautiful princesses end up on every royal short list of potential brides? It was soon apparent that it was no accident that the royal family amassed so much power. It stemmed from a vision for Europe originally inspired by Prince Albert, that appeared to spring from the best of intentions.

Well before there was any notion of today’s ‘European Union’, in the middle of the 19th century, Queen Victoria and Prince Albert were developing their own unique vision to use the marital alliances of their children to help bring peace to Europe and extend British power. Each marriage was a form of soft power: a path to spreading British liberal values across the continent. Albert saw the prospect of a federal Europe where a series of strong, independent countries, stable under their own constitutional monarchies – ideally modelled as closely as possible on the British constitution – were united by the common goal of achieving European peace and prosperity. Eight of their nine children would marry into European royal houses starting with their eldest daughter, Vicky, who in 1858 married the second Prussian heir – a future German emperor.

After the death of Prince Albert, Queen Victoria felt his wishes were ‘my law’ and she aimed to continue his vision. Over the years she had forty-two grandchildren the majority of whom survived to adulthood, and she was in a unique position to extend her own influence through her family dynasty. Queen Victoria was remarkably European in her outlook and with her Almanac de Gotha by her side (a Who’s Who of European royalty), she was much preoccupied with sizing up suitable marriage candidates. I found very revealing letters in the archives that shed light on the unions of key characters, some of whose marriages would shape the future of Europe – including personal letters from Alix of Hesse, the future tsarina and her older sister, Elisabeth of Hesse or ‘Ella’. 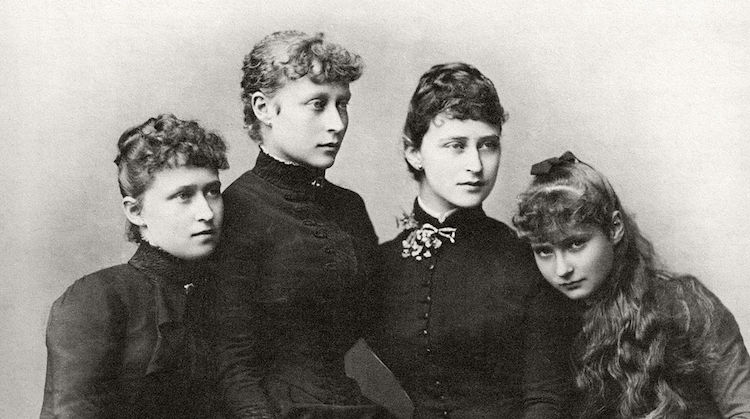 Reading the correspondence between ‘Grandmama queen’ and her grandchildren I began to focus on those characters who played a key role in the most significant matches, along the way encountering a rich cast. The heir to the British throne in the late 1880s was Prince Albert Victor or ‘Eddy’ whose reputation fell far short of his position as Europe’s premier prince. His younger brother, Prince George, had no desire to oblige his grandmother and hurry into marriage with the princess of her choice. There was the beautiful but wilful Ella who became locked in a ten year conflict with her grandmother over their different views on Russia. The most beautiful and sought-after princess of all, was Alexandra of Hesse or ‘Alix’ who had the temerity to turn down the heirs to both the British and Russian thrones.

Yet for all their glamour and wealth, knowing the ending for these characters it was hard not to see them as mere miniatures in a wider landscape, swept along by a great tide of change. Their stories are intimately interwoven with a backdrop of heightening international tension which culminated in the Great War. The parallels to today run through many themes in the book. Particularly striking is the birth of a modern form of terrorism. The anarchists and nihilists that brought terror to the royal palaces of Russia believed in ‘propaganda of the deed’ arguably foreshadowing todays suicide bomber. Their lives, they reasoned, had meaning in death; their actions would inspire others to revolt and help to destroy Russia’s despised autocracy.  Tsar Alexander II was ‘hunted’ by the terrorists, narrowly escaping with his life six times before in 1881 the dynamiters caught up with him. As the anarchists movement spread terror across Europe in the late 19th century, royalty was a key target, a means of bringing down the state. 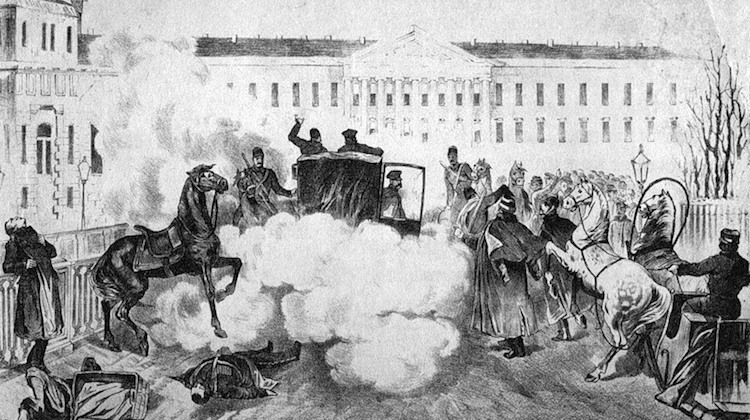 The role of the Queen’s eldest grandchild, Kaiser Wilhelm, in the cataclysm that engulfed Europe has been debated for a century. It was fascinating to see how from the 1870s onwards, Queen Victoria and her daughter, Vicky, lamented weaknesses in his character, his aggression and, once he came to power, his warmongering speeches. Vicky’s letters to her mother highlight her distress at the power of Wilhelm’s careless and provocative rhetoric, fanned by the press, to disrupt the peaceful Albertine vision of Europe. Within ten years Vicky was driven almost to treason in her frustration at his actions, revealing the anti-British policy of her German son to her British mother. ‘I think with fright and horror of the future’ she told Queen Victoria in 1898. ‘It makes one mad to think of all the misery that may yet come’.

In today’s Trumpian era, when daily tweets from the US President and his ‘fire and fury’ and ‘locked and loaded’ rhetoric is reported around the world stirring talk in the media of a Third World War, it is especially disturbing to revisit those gilded years before Europe stumbled into the Great War.  It was eerie to see how the leading characters in Queen Victoria’s Matchmaking anticipated the dangers clearly, in some cases decades before the First World War, and yet found themselves powerless to influence the course of events. As we listen to the sound bites of politicians today and contemplate the dangers ahead it is easy to call to mind the phrase, ‘history repeats itself, first as tragedy, second as farce’. Karl Marx’s famous quip does not do justice to the tragedy.

Deborah Cadbury is the author of eight acclaimed books including Chocolate Wars, The Dinosaur Hunters, The Lost King of France, Seven Wonders of the Industrial World, for which her accompanying BBC series received a BAFTA nomination, and Princes at War. Before turning to writing full-time she worked for thirty years as a BBC TV producer and executive producer and has won numerous international awards including an Emmy. Queen Victoria’s Matchmaking is out on 7th September.