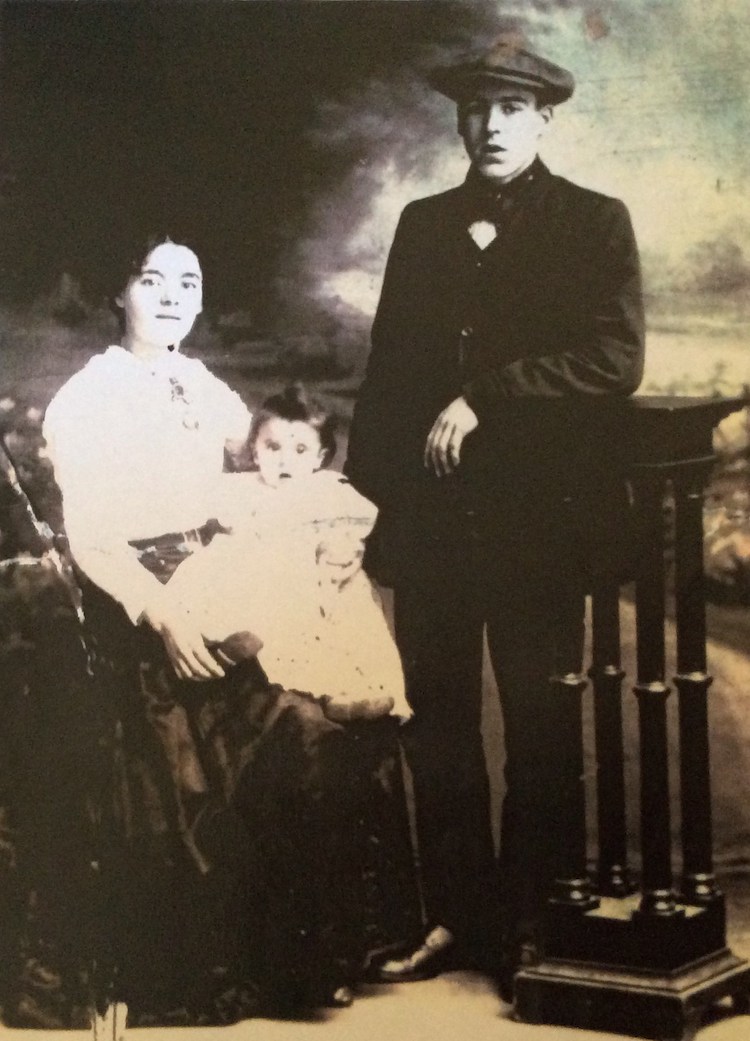 Dressed in their Sunday best, straight-backed and solemn-faced, the family in the photograph appears the epitome of working class respectability. Taken around 1913, the picture shows Annie Baker, her husband Arthur and their daughter Florence. There is a look of calm innocence in their eyes, and perhaps this is why I have always found the photograph so haunting. The Baker family could have no idea of the calamity which lay ahead.

I first came across the names Annie and Arthur Baker in 1997 when I was researching a newspaper feature about a First World War love story which ended in a murder trial. Decades-old documents relating to the case had just been released by the National Archives, and events which had remained buried for generations were now in the public realm again.

The archive papers – letters, police reports and witness statements – detailed Annie and Arthur’s lives. They married in 1912 and lived in Poplar, east London. Florence was born later that year and by February 1914 Florence had a brother, also called Arthur. War was declared that August, and Annie’s husband enlisted in the Poplar and Stepney Rifles. Soon after he left for the front, Annie found work as a waitress in a café at Millwall Dock. There she met Richard Luck, a labourer at a nearby shipyard. The attraction was immediate, and it was mutual. ‘I have loved this man and he has loved me from the first time I met him,’ wrote Annie.

My immediate reaction on hearing this story was not wholly sympathetic. Annie had betrayed her husband; worse, she had betrayed him while he was away fighting, risking his life to protect his family. How could she have succumbed to such a dangerous temptation? But equally I felt it was wrong to rush to judgement. Annie seemed like a character worthy of any Thomas Hardy novel – intelligent, passionate, doomed. I was curious to find out more, and to put her story into context.

I spent many days trawling through census records and birth, death and marriage certificates in an attempt to track down any living relatives of Annie Baker. Eventually I found an address for Joan Ward, whom I believed to be the daughter of Annie’s son Arthur. I drove out to Essex one icy January afternoon, armed with the photocopied documents, steeling myself for the moment when I would turn up on Joan’s doorstep. How would she react when a journalist began asking questions about her family’s scandalous past?

I needn’t have worried. Joan welcomed me inside, and I liked her instantly. She was in her mid-forties; a friendly, intelligent Londoner who loved books and history. She knew that there had been a tragedy involving her grandmother, but the details had never been discussed openly within the family. She was astonished and moved to read the documents. Then came the all-important question: ‘Do you have any photographs of Annie and Arthur?’ ‘Oh yes,’ Joan replied. ‘There’s one taken when Auntie Florrie was a baby.’

As I looked at the photo I felt any judgement against Annie melt away. Here she was, a pale-faced and delicate young woman, her baby fidgeting on her lap and Arthur by her side, looking almost confused to have found himself at the photographer’s studio. Perhaps it was because I liked Joan so much, but I felt certain that Annie was not a bad woman; rather that she found herself taking extraordinary risks in extraordinary times. She made a mistake, and she was forced to pay. She was only twenty-six when her story came to its heartbreaking conclusion – exactly my age as I sat in Joan’s front room holding the photograph.

During my years as a journalist I’d written hundreds of stories, yet this one stayed with me long after the newspaper feature had been published. I moved away from London, had a family of my own, and still I found myself thinking about Annie and the desperate situation she found herself in. Finally, in 2010, I sat down to write Before the Fall, a fictionalised version of Annie’s story. I kept a copy of the photograph above my desk, and I looked at it every day.

When the novel found a publisher, I wrote to Joan Ward to tell her the news. She has been very supportive, and feels glad that her grandmother’s story has not been overlooked. In sharing this family photograph, Joan has helped to preserve a fragment of First World War history which might otherwise have been forgotten.
Juliet West is the author of BEFORE THE FALL, a devastating tale of love and betrayal set in London’s East End during the First World War.