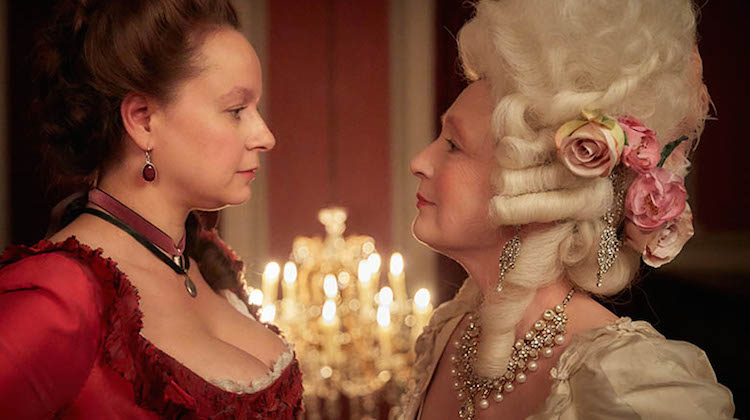 The opening titles of Harlots pull no punches: It’s 1763, London is booming and one in five women make a living by selling sex.

We’re plunged immediately into the vivid world of Margaret Wells’s brothel, as her working girls laugh and bicker over their entries in the latest edition of Harris’s List of Covent Garden Ladies. This 18th century gentleman’s guide to London’s prostitutes was a bestseller in its day. A rave review could make or break a brothel’s coffers. HWA member, Hallie Rubenhold’s pioneering research into Harris’s list and her book, The Covent Garden Ladies, inspired the series. (Read more about Hallie’s work and the history behind Harlots here.)

We soon learn that Margaret (Samantha Morton) has been a prostitute since the age of ten, when her mother sold her for a pair of shoes. Now running a brothel for ‘the middling sort’, she’s protective of her girls and ambitious for her two daughters. Her eldest, Charlotte (Jessica Brown Findlay), is beautiful, the darling of London society, and about to be contracted as mistress to Sir George Howard (Hugh Skinner, reprising the typecast role of fatuous posh boy that we last saw in Poldark). Conveniently, Charlotte’s rise to fame has allowed Margaret to keep her youngest daughter’s virginity intact to an age more acceptable to a modern audience, but she’s soon to be sold to the highest bidder.

Within the first ten minutes we’re introduced to a roll call of characters, Margaret’s brothel is raided and she’s fined £100 for running a ‘disorderly house’, putting her future plans for expansion into peril. The raid is the brainchild of Margaret’s old enemy and society madam, Lydia Quigley. Quigley is the ‘Lady Macbeth’ of the London sex trade, played by Lesley Manville with callous hauteur, her screen presence outshining even the most ridiculous wigs. We soon learn the reasons for the pair’s rivalry – a thread that I’m sure will unravel as the series progresses.

Are you keeping up?

The first half of episode one is breathless. Plot strands are set up, relationships established and Georgian London is recreated in a blur of bright coloured satin and hitched skirts. Blink and you might miss some deft writing and moments of real emotion in the whirlwind of bouncing, thrusting flesh. Inevitably, there is plenty of the latter.

But whether we’re watching sophisticated seduction in society bordellos, or squalid trysts with back alley ‘rutting poles’, the message is clear – there’s plenty of sex but this is not sexy. Rarely has so much naked flesh been less titillating. This is business and money rules the day. As Margaret says: ‘Money is a woman’s only power in this world. Wealth, real lasting wealth, will make you free.’

So Harlots is about power and freedom, or lack of it. It’s about love too. Not the romantic kind, not yet anyway. As Charlotte ruefully proclaims: ‘for a harlot that doesn’t exist.’ But love of another kind is powerfully evident as we watch Margaret struggle to reconcile her conflicting roles as mother and businesswoman. These scenes are the most affecting, as Samantha Morton steals the show, bringing emotional gravitas and a pause to the slightly hysterical pace. I expect we’ll be seeing similar character complexity from Lesley Manville in future episodes.

It seems though, ever since Peaky Blinders showed us how to do it, a modern score is de rigueur in historical drama. Sometimes it works. Not so much here. The music is frenetic and distracting. It adds to the pace but little else. We would have got the message with a different approach, which might have lent more class.

Harlots is an example of the current trend of filmmakers turning their attention to TV drama. It’s made by Monumental, the independent production company founded by the producers of Suffragette, Tulip Fever and Les Misérable and scripted by Moira Buffini (Jane Eyre, Tamara Drewe). Credible names at the helm have attracted superb acting talent. In less capable hands, this drama could descend into parody and cliché but the signs are reasonably good. With a near all-female writing and production team, the series is billed as a feminist take on a tricky subject, and Harlots does touch on some serious issues. There are clear modern parallels and an unflinching message that not much has really changed in the world’s oldest profession. Writer Buffini says, ‘We wanted to create a drama in which sex workers would recognise themselves; a drama in which we imagined what it was like to lead such a life, in a different time. It’s always been the coal-face of gender politics and that’s where we wanted to put our female gaze. Our characters have a contemporary edge. It’s a costume drama with its teeth sunk firmly in the modern world.’

Jessica Brown Findlay is hopeful that Harlots can raise awareness: ‘Maybe it can be part of a conversation or add to a conversation which is already being had but seems to be quite often stopped in its tracks by people who are afraid of it or don’t know what it is … it’s insane how little we have moved on in terms of women’s rights in this area.’

Whether or not Harlots has any thing meaningful to say is yet to be seen. Putting that aside, the show gives us an accessible glimpse into a slice of Georgian society, albeit in a way that feels very much on the safe side. Perhaps it could do with a bit more grit and grime – Taboo wins hands down on production design – but Harlots promises plenty of drama and some sturdy performances. I, for one, am glad to see an historical production focusing entirely on female leads, and specifically those so often absent from the historical record. Don’t be fooled – Harlots is not about sex. As Samantha Morton says, ‘Harlots is about women, the heartbreak, the cruel reality that is being a woman, the choices we are forced to make and why. Yet we still have grace, courage, hope and mostly, love. The world for women then was brutal. It still is.’

Harlots is on ITV Encore every Monday at 10pm in the UK, streaming on Now TV and on Hulu from 29 March in the US.